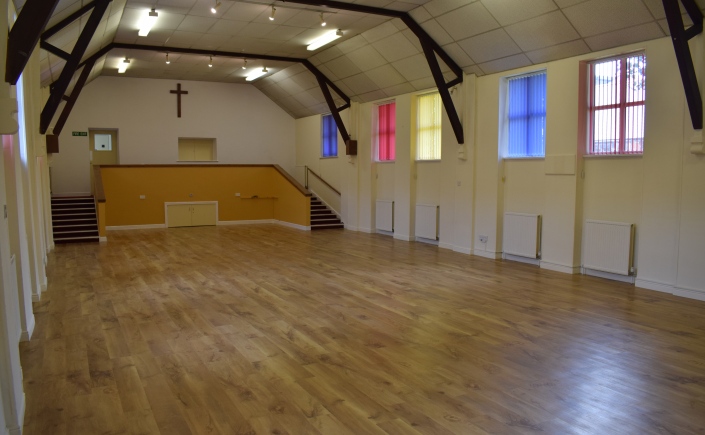 The Hall itself measures 56ft by 25ft, with tables and seating for 50 people, and will comfortably accommodate 100 people for a party or dance.  It’s an ideal venue for one-off events such as meetings, training sessions, or parties, or regular meetings of choirs, societies, and drama groups.

With plenty of high windows, the Hall is light and spacious without being overlooked.  The heating has recently been replaced, meaning the Hall is warm in winter and cool in summer!  There is a piano in the Hall which you are welcome to use for rehearsals or parties, and WiFi is available.

The Hall’s kitchen has recently been refurbished, and contains fridge, freezer, oven and dishwasher.  There are plenty of cups and saucers, crockery and cutlery for you to borrow.  The kitchen is accessible to wheelchairs via an outside path, not via the main body of the Hall.

There are three toilets off the Hall foyer, including one which is wheelchair accessible.  There are plenty of parking spaces at the Hall, either to the rear of the Hall itself, or behind the Church.

To view the Hall, please visit any Sunday morning at 11 am.

The Hall is situated in the beautiful grounds of St Lawrence Parish Church and is built on the site of a row of cottages which were held by the Vicars Choral of York Minster from the 13th century until the late 19th century.  The Hall was opened by Archbishop William Temple in 1935 and almost immediately requisitioned for government use in the Second World War. The Hall was refurbished in the 1980s and another refurbishment was completed in June 2016, with a new kitchen, new flooring, new windows, new boiler and insulation, and other repairs and modernising improvements.

To make an enquiry about a booking, please contact the Hall Manager on stlhallbookings@gmail.com. .

To make an enquiry about a booking, please contact the Hall Manager on stlhallbookings@gmail.com .